Learn about the history of our region and visit the most beautiful castles and manors in the area. Right at the heart of the region, in the town of Žilina, there is Budatín Castle and its extensive English landscape park. Did you know that you can climb its tower for an comparable view of Žilina and its surroundings? The romantic walk to Lietava Castle will become a treasured memory. Lietava Castle is the largest ruined castle in Slovakia and was once considered impregnable.

The liveliest cultural events take place at Strečno Castle, which stands on a towering cliff offering gorgeous views of the River Váh and the villages on its banks. A bit higher, on the opposite bank of the Váh are the legend-haunted ruins of Starhrad, or Varín, Castle.

Lovers of Renaissance architecture will certainly find interest in Bytča Castle, which is now the seat of the state archive. The town of Bytča offers another cultural curiosity, the handsomely restored Wedding Palace in the castle grounds. No tour of the region should overlook one of our oldest cultural heritage monuments – the manor house at Radoľa, where you can learn how the people of the Kysuca region lived in earlier times.

Plan an easy family trip into the natural beauties of the Malá Fatra Mountains, pack your picnic basket and head out on an adventure. Have you ever had a picnic at a castle with a view that made you feel like the whole country was in your arm’s reach? Head south-west from Žilina to the villages of Lietava or Lietavská Svinná, which are the starting points for easy walks to the castle.

The castle of a Palatine

The castle’s origins date from the end of the 13th century and are linked to the Balaš family. However, the most famous owner of Lietava Castle was probably Juraj Thurzo, Palatine of Hungary (the highest-ranking office under the king). In the past, the castle was a very extensive complex of buildings. At its core was a square keep, to which a palace was attached terminating with a chapel. The castle had two courtyards. Historical records say that Lietava Castle had around 90 rooms.

The most extensive ruin in Slovakia

Lietava Castle stands above the villages of Lietava and Lietavská Svinná approximately 13 km from Žilina. The complex has one of the largest areas of ruined castles in Slovakia and it is recognised as a national cultural heritage monument.

A good walk to the courtyard

There are two marked trails to the castle. Enthusiasts with strong legs will enjoy the blue hiking trail from the Majer hamlet in Lietava. Children and families may prefer the green-marked trail from the village of Lietavská Svinná, which leads through meadows with fine views of Lietava Castle and then through the refreshing shade of the forest.

Get up early and bring a torch and a camera. If you get to Lietava Castle before sunrise, you will be able to witness nature and the sky putting on an amazing show. The early start will be rewarded in the best way possible: a beautiful view of the rising sun.

There is no need to go so far out of Žilina. A pleasant stroll brings you to the suburb of Budatín, whose castle was one of the watchtowers of Slovakia. As soon as you arrive at the estate, you will be charmed its beautiful English landscape park – an ideal place for families with children, romantic couples or groups of friends, not forgetting the four-legged members of the family.

The first records of Budatín date from the 13th century. It is interesting to learn how the original watchtower was built. The site began as a small rocky outcrop in a swamp, on which clay was piled up to make an artificial hill. There are many legends about its history. Did you know that it changed owner several times? The owners included famous names in our history such as Matúš Čák of Trenčín and Sigismund of Luxembourg, who gave the castle to his wife. At times the castle was described as an abandoned ruin.

Tinkers’ wire craft is a Slovak folk art closely associated with the Kysuce region. Budatín Castle is a good place to learn about this craft. You can see the history and the works of the tinkers from their itinerant beginnings to factory production. Your children will enjoy the collection of large figures of people, animals, fairy-tale beings and models of means of transport all made out of wire.

A picnic on the castle lawn

If you are the sort of person who prefers taking it easy or having a romantic stroll when you are on holiday, you should not miss the 50,000 m² park in the English style around Budatín Castle. And why not put together a little picnic? One of the most beautiful parks in Žilina has many private spots for picnics under the crowns of the trees with views of the castle. While walking in the park, you will be sure to notice the majestic linden tree, a symbol of the Slav peoples, which has dominated the park for over 350 years. Another feature of the park is a wooden model of raft with two sailors of the sort that used to sail around Budatín.

The tower of Budatín Castle has been open to visitors since 2014 and offers a really beautiful view of Žilina and its surroundings. It is worth taking a few minutes from your rest in the park to run a few steps.

On its limestone crag on the left bank of the River Váh, Strečno Castle stands proudly above the village of the same name. It could have been created as a destination for outings with children. We are sure that a few dozen steps will not deter you from visiting one of the most heavily fortified castles on the upper Váh. Will you manage to conquer this fortress?

Great views come as a bonus

Once you have climbed all the steps, you will be greeted by a view that is really one of its kind. Probably no one who has visited Strečno has left without a photograph from its bird’s-eye perspective on the River Váh.

The tour of the castle includes an archaeological exhibition, a historical section and the castle kitchen. The latest exhibit to be added is a blacksmith’s workshop. The most important figure in the history of Strečno is Žofia Bosniaková. Her good deeds and kindness to the poor and the sick earned her the nickname of the saint from Strečno. She died at age 35 and later her body was found to be incorrupt in the castle crypt. It was later transferred to the church at Teplička nad Váhom, where it is possible to visit her grave. A clay effigy of Žofia is now displayed in the castle crypt.

How to get to the castle

Start from the carpark under the cliff and follow the steps up to the castle. The exact number of steps is our little secret.

When you step into the village of Paseka at the foot of Strečno Castle, you will feel like you have stepped into the real middle ages. The village is based on authentic medieval buildings. You will find there the cottages of a baker, a fisher and a folk healer, and a pilgrims’ shelter. All the cottages are fully furnished and have thatched roofs. The village also has a working bell tower and well. Tradition was considered when choosing the building materials – mainly wood and reeds in this case. Near the village is picnic site with a firepit for barbecues, so if you get hungry you can cook up a tasty snack and have a fun family day out at the castle. There is a wooden playground for younger visitors. 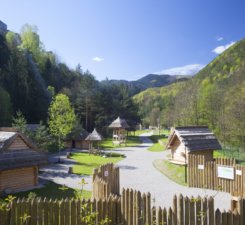 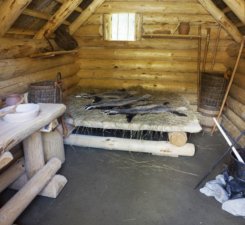 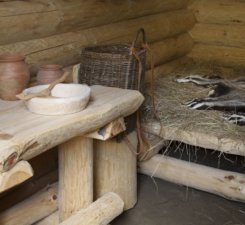 The castle has a year-round programme of events

If you come during the summer, you can see performances by knights, falconers and improvised theatre troupes that will transport you back to the time of kings and queen, and demonstrations of traditional historical crafts. Are you a fearless type who loves adventures? Then you mustn’t miss our spooky night-time tours of the castle. The summer season culminates with the Žofia Bosniaková Castle Festival in August. The adjacent amphitheatre is a great festival venue! If you enjoy sports, we recommend taking part in the Castle Steps Run, and if you manage to count the steps, you can tell us your guess at the end.

Starhrad Castle, also known as Starý hrad or “Old Castle”, can be found on the opposite bank of the River Váh, a short walk from Strečno Castle. The walk to the castle is easy and enjoyable for families with children. Don’t forget to pack something good to eat in case you get hungry on the way or you spot a good place for a barbecue. When you find a safe firepit, cooking over an open fire is great addition to a stroll or a hike. Holidays in the Malá Fatra Mountains offer many ways to get to know the beauties of our region.

From Varín Castle to Old Castle

Did you know that the Old Castle was the first to perform the guard function of Strečno Castle? The castle was built to protect the trade route along the Váh, not far from a ford where the old road crossed from the right to the left bank. It belonged the manor of Varín and was called Varín Castle at first. It became known as the Old Castle after Strečno was built and took over its function.

Follow the red-marked hiking trail starting in the village of Nezbudská Lúčka. It is about an hour’s walk but there are fantastic views along the way so you might want to extend it. Allow plenty of time at the destination to enjoy the unique view of the Domašínsky Meander, where the River Váh loops around.

Where else would the oldest cultural heritage monument in the Kysuca region be than in the region’s oldest vilage, Radoľa? The jewel of Kysuce – this is a common nickname for the Renaissance manor house at Radoľa. Discover another of record-breaker of the Malá Fatra region – visit Radoľa.

We will probably never learn how the manor house originated. Its oldest part probably dates from the 16th century. Since then it has been modified several times. Would you believe that in its time it had barns, stables, fish ponds, orchards and even a brewery, hop-garden, mill and sawmill? Later it was used only as a residence, until it was rebuilt again.

A mammoth’s tusk and calf in Kysuce

The Earliest History of Kysuce is the title of an exhibition by the Kysuce Museum documenting the region’s history from the Upper Palaeolithic to the middle ages, presenting life in the oldest settlements in Kysuce. The main attractions are a mammoth tusk and a replica of a mammoth calf, which will interest every visitor. Upstairs you will find another permanent exhibition How Townspeople Lived in Kysuce. The name indicates what the exhibition offers. Come and look into a residential bedroom from the end of the 19th century, which will give you a perfect idea of what life was like then.

Subscribe to our newsletter and it will be our pleasure to send you the best tips, offers and events that make our region worth visiting.